Our second cycling adventure took us on a 33 km loop to the east of Cattistock, taking in Cerne Abbas and Charminster. Still no episcopal recommendations, but Cerne Abbas grew up around the Benedictine monastery Cerne Abbey and the church at Charminster must have been at least of moderate importance in medieval times to warrant the title “minster” .

On to the ride:

Again there were some  long and steep hills involved, more or less right from the start of the ride. With this ride however all the killer hills were in the first third of the ride. I’m not sure if that made it easier or not.

At the foot of the first descent there was a ford. Fords always present me with a dilemma when I am on the bike, do I ride through at full speed spraying water everywhere, or should I stop and assess the ford before either riding, through walking through or pushing the bike across the footbridge. Fords can be deeper than you might think and the underwater surface can also be more slimy than you might thing, both of which can lead to you becoming wetter than you might think. In the end Grace had stopped and decided that the footbridge was the better option. 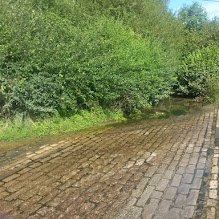 So it was onwards and upwards towards Cerne Abbas. We decided to forgo the advice of the guy who showed us into the cottage on Saturday. He told us that there was a very good pub in Sydling St Nicholas should we need sustenance for the climb up and over to Cerne. However by the time we arrived in Cerne it was time for lunch. We stopped at Abbots Tea Rooms where they do a really good lunch, reasonably priced, at least to someone used to paying London prices. Opposite the tea room was this place which raised a question in my mind –

The main thing that Cerne Abbas is known for is the “Cerne Giant”, a hillside chalk carving of a naked man brandishing a large weapon as well as an outsized club. The origins of the Giant are obscure. It looks as if it should be an ancient fertility symbol, but there is no record of it having existed before the c17th. This has led to speculation that it was originally intended to be a political satire on Oliver Cromwell, or possibly made by the c17th equivalent of a bunch of drunken Young Farmers or students. Cerne Abbas was famous for its brewing industry in the past. There are many local legends associated with the Giant. One says that if a couple are having problems conceiving then they should make love on the Giant’s penis to guarantee conception.

We finished our lunch and it was onwards and upwards yet again. This time up Piddle Lane (as opposed to Cow Poo Alley).

Many places in this part of Dorset have Piddle as part of their name; Piddlehinton or Piddletrenthide for example. In some cases the  Victorians bowdlerised Piddle to Puddle, as in Tolpuddle or Puddletown, though in the latter case I have it on good authority that the locals still refer to it as Piddletown. This is because the River Piddle runs along the valley that we were climbing up and over the ridge to.

From the top of the ridge it was a long and fairly fast drop down to Charninster. The map indicated an unclassified road  , so I did not expect the amount of traffic that we encountered. The road was quite wide (a full two lanes) for an unclassified road so it wasn’t particularly dangerous, but we were both quite glad to get away from the traffic when we got to Charminster.

The last leg of the journey was back up the Frome valley to Cattistock following National Cycle Route 26. The part the we followed had varied sections, from a cycle path along a busy “A” road, a cycle path that was too narrow to allow two bikes to pass without at least one of them stopping, to reasonably well surfaced minor roads with little to no traffic, to farm tracks and one section through a wood that could probably be best described as moderately technical single track – well it was if you were on a road bike. The signage was reasonably easy to follow, though in a few places vegetation obscured it. However I must admit that my Garmin did help with finding the way. In short the eight mile section had everything that I love and hate about the National Cycle Network. At least the off-road sections made sense on this route, unlike some where the route deviates from a perfectly good, lightly trafficked road to take you down an overgrown goat track only to bring you back onto the self-same road about two miles later.

All in all it was an other great ride in stunning Dorset countryside. The hills are steep, but they are worth the effort,  and anyway you can always push up (or buy an e-bike).

One thought on “Cycling in Dorset: Part 2”

This site uses Akismet to reduce spam. Learn how your comment data is processed.

I live in South London, although I was born and brought up in Scotland.

My likes and interests are varied, but certain things are likely to come up more than others. Food, cycling, football – especially AFC Wimbledon – and art will definitely make regular appearances as will politics and the occasional forage into theology.

My wife, Grace, died in April 2016 so there will be the occasional post remembering her and reflecting on widowhood.

Catch up with the Ramblings